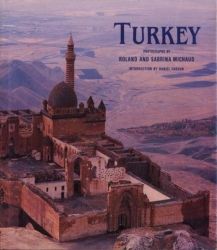 Here are the greatest wonders of Turkey - architectural and sculptural marvels from ancient times, masterpieces of Byzantine art, the great buildings and decorative schemes of the Seljuk and Ottoman periods, and spectacular landscapes. The visitor to Turkey discovers and extraordinary country of matchless variety and contrast: European Turkey, with the Selimiye Mosque at Edirne; İstanbul, where East meets West in a city of continual contrasts; the Aegean and Mediterranean coasts, where wildflowers bloom amid Greco-Roman sites; and far to the east, the borderlands, where the feudal palaces of Ishak Pasha commands the Silk Road.
The beauties of the land and of the Turkish people are equally varied and memorable - the turning of the seasons in Anatolia, village markets, pasturing the herds - a distinctive and colorful way of life, unchanged from time immemorial and birlliantly captured by the internationally renowned photographers Roland and Sabrina Michaud.
The Introduction is by the well-known writer and broadcaster Daniel Farson, who has travelled extensively throughout Turkey and describes it as the friendliest and most beautiful country he has visited. He is the author of A Traveller n Turkey (1985).
(Kapak)