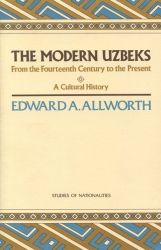 In the study of the modern Uzbeks, Proffessor Edward A. Allworth provides a comprehensive and authoritative survey of an imprtant group of Muslim people who live within the boundaries of the Soviet Union. After Russians and the Ukrainians, the Uzbeks are the largest ethnic group in the Soviet Union and the strongest of a number Muslim communities that populate the vast regionof Central Asia.

Although the concentrates espacially on the imperial Russian and Soviet periods of history, the author also gives earlier periods of Uzbek history solid scholarly assessment. Meticulously analyzed are Uzbek relations with their foreign rules, the Uzbek response to Russifications and modernization, and the ethic and religious issues in Uzbek society.

Also included is a critique of Soviet historiography and the underlying philosophical and ideological commintments that have shaped the study ofhistory in the Soviet Union. Invaluable to scholars is the survey and assessment of Uzbek documents in Turkish, European, and American depositories.

Edward A. Allwort is Proffessor of Turca-Soviet Studies, Head of the Center for the the Study of Central Asia and the Division of Central Asian Studies, and Director of the Program on Soviet Nationality Problems, all at Columbia University.