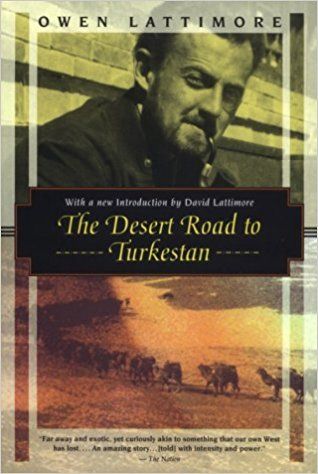 In inner Mongolia in 1927, when travel by rail had all but eclipsed the traditional camel caravan, Owen Lattimore embarked on the journey that would establish him as a legendary adventurer and leader among Asian scholars. The Desert Road to Turkestan is Lattimore's elegant and spirited account of his harrowing expedition across the famous "Winding Road."

Setting off the rejoin his wife for their honeymoon in Chinese Turkestan, Lattimore was forced to contend with marauding troops, a lack of maps, scheming travel companions, and a blinding blizzerd. Luckily he had with him not only his father's retainer, Moses, but a team of camel puullers and Chinese traders he had assembled to teach him the ropes about their mysterious and now extinct way of life.

Lattimore's gifts as a linguist and his remarkable powers of observation lend his chronicle an immediacy and force that has lost none of its impact in the decades sinse its original publication.

Owen Lattimore was one of the foremost China scholars of this century. In 1950 Senator Joseph McCarthy labeled him "one of the top Communist agents in the country." After years of Senate hearings and appeals, he was exonerated and left the United States to become Proffessor of Mongolian Studies at the University of Leeds. He died in 1989. The books High Tartary and Turkestan Reunion (by Eleanor Holgate Lattimore) are also available from Kodansha Globe.

David Lattimore is Proffessor of Chinese Studies at Brown University.