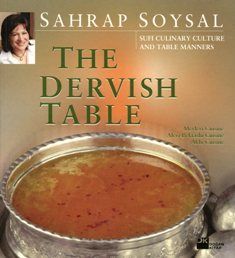 Did you know that when the Mevlevis turned their spoons over so that the hollow of the spoon was facing the table, with the handle to the right; they called this “the spoon bowing with a humble gesture of respect.” The Alevi-Bektashis however, placed the spoon so that the hollow of the spoon faced upwards and they called this “ the spoon at prayer?”
Did you know that in Alevi-Bektashism, the lokma (food) was a pretext for conversation, and conversation accompanied by food pleased hearts and souls?
Did you know Akhism a princh of salt was thrown into water saying “this is Sharia” another pinch, “this is the Order”, and after the third pinch, “this is the Truth”, and that the pupil was made to drink this salty water?
Did you know that greenery drives Satan away, water symbolising industry extinguishes revenge and envy, saly symbolises balance and moderation and that pilaf and halva are ceremonial food?
Eat bread and be thankful; eat halva and be sweet.
(Arka Kapak)