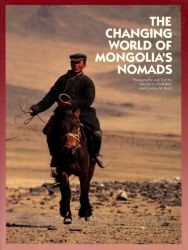 With the demise of the U.S.S.R. went Mongolia's Marxist-Leninist regime and industrial base. Throughout its seventy-year history, Mongolia's communist goverment had adhered to strict Marxist ideology and refused to allow Western scholars to conduct field work. In 1989, renowned anthropologists Melvyn C. Goldstein and Cynthia M. Beall secured permission to conduct anthropological fieldwork in Mongolia. On three separated trips, they lived among a community of herders to study how they had fared under Marxist collectives and to observe how they were adapting to Mongolia's transition to a democratic nation with a market economy.

Weathering tempratures below zero, living in the nomads'ger, drinking suteytsai (milk-tea), and eating bordzig (apastry made from wheat dough) and pieces of solid fat (a Mongolian delicacy), Goldstein and Beall studied the seasonal migrations of these self-reliant pastoralists.

The nomads of the Altai Mountains in western Mongolia continue to rely on their sheep, goats, cattle (mostly yaks), horses, and camels for their livelihood. Herders move their animals to exploit the seasonal vegetation and maximize the transfer of energy from vegetation to livestock. Goldstein and Beall watched as negdel (herders' collective) under the Maxist-Leninist system made the difficult transition to a shareholding company through the goverment's privatization reforms. During their visit, they came to understand and admire these straightforward and proud people as they adapted to the enormous changes that Mongolia experienced in becoming the first Asian country to discard communism.