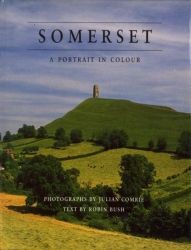 Somerset remains one of the most unspoilt and varied of English counties, and yet this is the first book ever published to portray it completely in colour. It is county of contrasts. To the west lie the rolling open uplands of Exmoor, whilst to their east three ranges of hills - the Brendons, Blackdowns, and Quantocks - border the fertile Vale of Taunton. Further east stretches the wide expanse of the Somerset Levels, drained by an elaborate network of ditches, but an area still often flooded in winter. The rich agricultural land continues through the south and south-east. The northern boundary of the country is marked by the Mendip hills, rising beyond Wells and cleft by the dramatic Cheddar Gorge.
As Robin Bush says in his introduction, the nearly 250 photographs in the book 'forn a truly magnificent portrait of the country.' Few corners have been ignored by the photographer Julian Comrie, whilst Robin Bush's evocative text delightfully complements the pictures. People as well as places are captured by some of the most stunning photographs ever to be taken of an English county. There could be no better introduction to those who do not know Somerset, whilst at the same time revealing it afresh to those who already are familiar with it.
(Kapak)