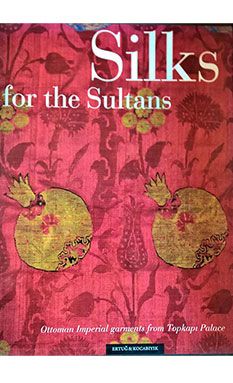 The garments showed and described in this book were chosen from about five thousand objects in the garments and accessories collections of Topkapı Palace Museum in İstanbul. In making this selection, emphasis was placed on the silk kaftans (robes) that were worn by the sultans with an eye also on such criteria as color, design, and quality reflecting the rich cosmopolitan atmosphere that pervaded the Ottoman court.

The examples in this book are classified according to principle design categories within which they are generally presented in chronological order. This has the advantage of reflecting the stylistic developments that took place in the design-shops attached to the Ottoman court. The first category consists of fabrics with the "triple spot" motif and its variations. The second group presents two examples of garments in the "saz" style and in the third, of the "Floral style". These are followed by kaftans in "Seraser" fabrics. The next three groups are devoted to fabrics that are of European origin or were imported from India. The next two categories show items of dress made from plain fabrics, some with appliqué designs, others garments from the 18th and 19th centuries. The last group are not kaftans but talismanic shirts, included because the unusual calligraphic treatment of their designs provides an intresting coda to the magnificent and elegant garments that precede them.

The images are supported by three essays written by specialists in their respective fields. The importance of dress in the Ottoman Empire is discussed by Dr. Hülya Tezcan, curator of the Textiles and Dress Section of Topkapı Palace Museum, in her survey of the history and development of the imperial kaftans in the Topkapı Palace collection. Dr. Patricia Baker, an author and lecturer on the history of Islamic art, explores the relationship between Ottoman poetic imagery and textile patterns. Jennifer Wearden, deputy curator of the Textile and Dress Collection of the Victoria and Albert Museum, considers the technical constraints facing the court tailors, designers, and weavers and the methods by which these were overcome.