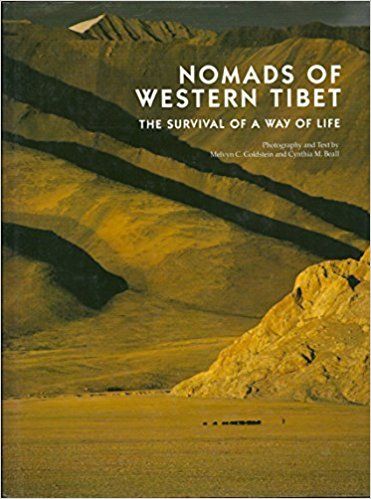 For sixteen Months between June 1986 and June 1988, Mekvyn Goldstein and Cynthia Beal lived in Tibet studying a community of roughly three hundered Tibetan nomands at altitudes above 16,000 feet in yak-hair tents, weathering temperatures which reached thirty to forty degrees below zero, drinking butter-salt tea, and eating tsamba-popped and ground barley- and mutton. This copiously illustrated book is a fascinating account of these remarkable people, of their traditional way of life and their continuing struggle for cultural survival. In a world where indigenous peoples and their environments are vanishing at alarming rates, the survival of this way of life represents an unexpected and heartening victory for humanity.

As the first Western scientists allowed to conduct in-depth research in Tibet in decades, Goldstein and Beall were given the oppotunity to study first hand long-term the traditional lifestyle of the nomad's of Pala, a remote district on Tibet's western plateau konown as the Changtang. The authors accompanied the nomads on their daily trips between the homebase encampment and the grazing grounds, on seasonal migrations to distant pastures and satellite camps, on yearly hay-cutting and salt-collecting events, and on hunting excursions that included the use of matchlock rifles and "blue-sheep" dogs. The authors also participated in the milking, shearing, and burchering of the pastoralists" sheep and goats. The census and grazing-enclosure data the authors collected credit the nomads! traditional pastoral system wtih maintaining the sensitive ecological balance necessary to guarantee its perpetuation for countless centuries. Finally, the authors relate the radical changes wrought by the Cultural Revolution on the nomads' lives.