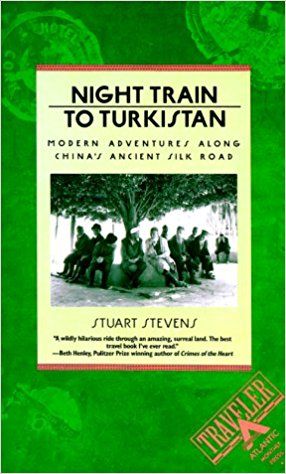 So beings NIGHT TRAIN TO TURKISTAN, Stuart Stevens' irreverent, irresistible Chinese traveler tale. In the late fall of 1986, Stevens, a young political consultant and writer, invited three friends to join him on an unlikly 5,000-mile quest along China's Ancient Silk Road. Their goal was to retrace the steps of a famous journey made in 1936 by Peter Fleming, an eccentric British writer/traveler who, like his brother lan Fleming, had a flair for exceptional adventures.

Stevens' choice of companions is more amusing than useful - a triathlete and closet good ole boy, a kung fu expert from Yale, and a six-foot-tall female rower in Lycra stretch gear. Only one of them -Mark Salzman, author of the acclaimed ıran % Silk - had ever been to China before and Salzman is profoundly unsure he likes being back. Together this improbable foursome sets out from Beijing determined to follow Fleming's route on the Silk Road to Kashgar, the fabled capital of Chinese Turkistan (or Tartary as it has been known for centuries) is one of the wildest, least populated regions on earth, dominated by the fierce Takla Makan desert, a name which translated into "you go in, but you do not come out."

In the unbelievable cold of Chinese winter, Stevens & Co. rumble across China in trains, donkey carts, bicycles and some of the more memorable buses in recent literature. Often trapped in monolithic Russian-built hotels, they battle, bluff, and plead their way through the mazes of Chinese bureaucracy, surviving on such delicacies as lamb fat and cold noodles.

Crammed with memorable characters and unforgettably funny scenes, NIGHT TRAIN TO TURKISTAN is a rare, high-spirited romp across a country where travelers are greeted with "Comrades, we welcome you to your journey. Please do not spit everywhere..."