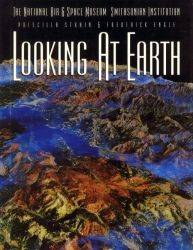 Looking at Eart is an unprecedented portrait of our planet as seen from the heavens. Continent by continent, we see Eart, not as shown on maps or globes but as it looks in images recorded by spacecraft, revealing aspects of this planet previously hidden from our eyes.

Spectacular wonders -the Grand Canyon, Mount Fuji, the Anders, Africa's Great Rift- emerge in great sweeping panaromas and appear as even greater wonders. A mosaic of nighttime images produces a breathtaking view of the United States, its cities glittering from coast to coast. Ancient river channals that vanished under the Sahara reappear when radar signals penetrate the sands and disclose what lies below. On an image of Africa, a sharp line marks the Angola-Namibia border and demonstrates the economic and political separataness that once divided the two countries.

From space we see the result of human hammering upon the face of the Eart more clearly than ever before. An inland sea dies. Floodwaters wash over land denuded of natural barries. A lake struggles to survive againts ever-increasing flows of pollutions.

The Nimbus-7 that confirmed the Antartic's ozone hole and other satelliters have shown policy makers the results of projects that thereaten the environment. İmages from space are vivid warnings of trouble -blueprints for the job of saving the Earth.

Looking At Earth also describes Eart-viewing spacecraft and their instruments, and provides information about obtaining copies of many images included in the book.

Looking At Eart is produced as part of the Smithsonian Institution's Columbus Quincentenary program. The book is based on some of the research conducted for the highly successful "Looking at Eart" exhabition at the National Air and Space Museum.