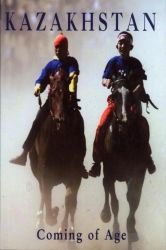 Kazakhstan is surely destined to become a highly significant player on the world scene. This comprehensive work, Kazakhstan, Coming of Age, places this remarkable country in that scene: its prospects, its history, geography, ways of life, ecology, economy, and political structure, its astonishing cultural heritage.
Kazakhstan is the world's ninth largest country, stretching from Europa (of which it froms a part), to the borders of China. It provides Russia with its largest common frontier. It possesses the third largest reserves of exploitable oil and gas of any country on earth, and what is described as 'the entire Periodic Table' of mineral assets. It is stable and soberly governed. It is specifically beautiful and inhabited by a robust and striking people.
Here is Kazakhstan in a work combining sound scholarship and research, written and assembled by experts, with over 400 photographs and many maps. It is the foundational work on the country, presented in the long-recognised Stacey International mould.
(Kapak)
Bu ürün için ortalama kargo süresi gündür!