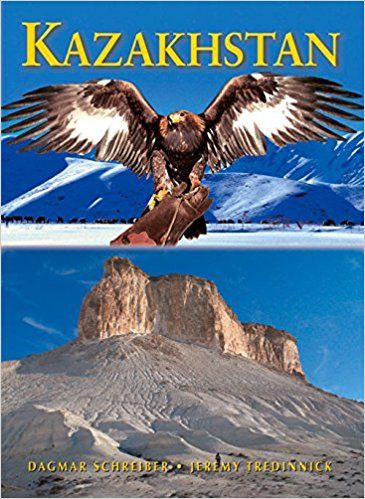 A country larger than Western Europe, Kazakhstan's vast expanse encompasses the Great Steppe, across heights of the Tien Shan in the south, through whose foot-hills Silk Road travellers journeyed; the exquisite lakes and valleys of the mystical Altai mountains in the northeast, and in the far west the archaeologically rich desert coast of the Caspian Sea. With independence and the discovery of oil has come huge change and rapid modernization, yet Kazakhstan remained one of the least known of Asian countries until out of the blue the "Borat" movie took the world by storm in 2006. Now, this land of rich history, inspirational landscapes and welcoming people shares its wonders with a curious world.
Dagmar Schreiber studied philosophy in Leningrad (St Petersburg) and Moscow, before joining the World Bank study project on living standarts in Kazakhstan in 1994. During this three-year project she feel in love with the country; over the course of numerous far-reaching trips she became aware of its enormous potential for tourism, and subsequently formed a small, Berlin-based tour agency in 2003, specializing in eco-trips designed to reveal Kazakhstan at its best: a fascinating and rewarding destination.