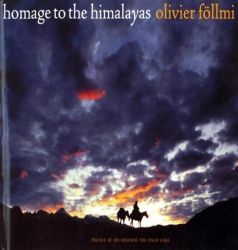 For most Westerners, the distance from our modern world to the remote villages of the Himalayas is yoo great to traverse, even in imagination. In this collection of photographs, Oliver Föllmi demonstraters that the gap between cultures, no matter how great, is only one of perception. His images of pure snow, high peaks, and foreign customs transcend the categories of beauty or human interest. Föllmi firs visited the Himalayas twenty-five years ago, and the land has never lost its hold on him. The photographer's love of his surroundings transforms his subjects and brings them near. Through his lens, we have the rare pirivilege of experiencing one of the planet's most treacherous climates; strange faces, both familiar and lovely; and the outward traces of this culture's spiritual tradition of serenity.
It is not possible to feel such love for a place without becoming part of it. The next that accompanies these photographs describes how the Himalayas, over time, have literally become Föllmi's life. These places and people define Föllmi's world; the offering he makes within these pages expands our consciousness- not only of ur world, but also of our humanity.
-İç kapak-