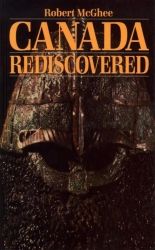 Ask a group of Canadians: who discovered Canada? John Cabot, some will answer. Others will say Eirik the Red, or Jacques Cartier. Some might name the Amerindians, who migrated from Asia thousands of years before the first European arrivals.
Unknown to most readers, the truth of Canada's many discoveries and rediscoveries is a fascinating tale of advature, peril, conflict and heroism. Robert McGhee weaves the strands of European explorations - Irish, Norse, English, Portuguese, French, Spanish - into a rich tapestry of encounters with the land we call Canada.
(Arka kapaktan)